Saved By The Bell Wiki
Register
Don't have an account?
Sign In
Advertisement
in: Episodes, Saved by the Bell (2020) episodes

Wrestling with the Future

See also Wrestling with the Future from the original series.

Slater talks to Miriam, saying at some point, you're too old to reinvent yourself. That's why he's worried about The Undertaker. Miriam wants to talk about him now. He says there's not a lot to talk about. His life's been pretty normal. Slater talks about his life while Miriam takes notes until she runs out of paper. She suggests they talk about the week ahead and asks if there are any potential stressors. He denies having any, but then mentions the career fair and feeling like a failure compared to his high school friends. It's not a big thing, but all his friends have big jobs. Miriam reminds him everything doesn't have to be a competition. Zack always makes everything a competition. She suggests he try to break old patterns, choose not to compete with Zack. Slater says Miriam hasn't helped him at all. She reminds him he's only come three times.

Daisy asks who's excited for the career fair. Jamie is because he wants to learn about a career he knows very little about. Daisy made a map to plot out how best to hit every booth. Mac says he's not going because he's working on something very important. He tries to be mysterious, but they know he's just pranking Toddman again. Mac pretends he isn't, but Aisha interrupts him to say she's not going either because it sounds boring. Daisy says it's not boring. DeVante wonders if it'll actually be different from the Douglas career fair, where teachers made them update their LinkedIn profiles so they could look for other teaching jobs. Daisy says some booths will be giving out free merchandise. Aisha agrees to go.

Slater meets up with Zack, Kelly, Jessie, and Lisa at the career fair. Kelly and Zack are setting up a booth for Kelly's Dr. Happy brand. She's had multiple offers to sell it. Zack's not doing this own booth, because he doesn't know what he'd put on it. Slater wouldn't know what to put on his either. Toddman comes up, happy to see them. He's on edge because of what Mac did at the last career fair. He can't produce his own saliva anymore. Kelly says one of the side effects of his ADHD medication is that he's The Omen. Toddman asks if he mentioned anything he was planning this year. Zack says he said he was working on something important, but he won't say what. Zack and Slater leave to go hang out.

A pilot, Captain Frank Douglas, gives a speech to the kids. DeVante understands because he enjoys the view on video games. The pilot says flight simulator video games made him want to be a pilot. Daisy thanks him, tells the others it isn't for the, and ushers them to keep moving. DeVante's upset because he was interested. Lexi adds that she was kind of rude. Daisy says they have a lot of booths to hit. Aisha walks up to another booth and asks the booth guy for a fan. He asks if she's really interested in his booth or if she just wants the fan. She pretends to be interested. She's interrupted by Chloe approaching and saying she's actually interested in consulting and was just reading about another company. The guy tells Chloe to take a fan and goes to get her a pamphlet. Chloe says the trick is to mention their biggest competitor. Aisha asks Chloe to team up with her to get merch.

Toddmanm spots Mac with a firecracker and goes to stop him. He approaches only to find it's not Mac, but a woman trying to light a candle. A pediatrician at a nearby booth, Claire, sees him holding his eye and suggests he put some ice on it. He has a Hungry Man defrosting under his desk, but she has an actual ice pack she offers to him. He becomes suspicious that she's part of Mac's prank and goes to find him.

Zack punches Slater in the stomach so Slate can prove he has abs of steel. Slater admits he was worried he'd be the only loser there without a booth. Zack understands. His life sucks. He has nothing going on. Zack bets Slater $50 his life sucks worse than Slater's. Slater says it's not a competition, so Zack goads him. Slater ups it to $100.

Lexi introduces herself to Lisa. She was at Lisa's show, but got kicked out for being nude.

Kelly asks Lisa for a good guy they could set Jessie up with. Jessie says it's too soon for her to go on a date, but they say she needs to break the seal. Jessie says her life is really full even without a relationship. She hates the idea of starting over. She thought life would be more figured out by now. Lisa says no one has it all figured out. Even her. She's in a creative rut and uses the clothes in her booth as an example. Jessie says they look like clothes she would have worn in high school. She checks on and notices the tag says Jessie. She did wear that in high school. Lisa couldn't think of a collection, so she dug through her parents' garage. Kelly doesn't have it figured out either. She's been secretly getting tutored for the MCATs. Her company is doing well, but she wants to help people, not just sell snake oil to rich idiots. Jessie had no idea. Kelly notices a firefighter nearby checking Jessie out. She denies it, but a waiter delivers a drink from the firefighter. The firefighter slides down the pole and winks at her.

Kelly tells Jessie to go flirt with him, but she doesn't remember how. Lisa tells her to walk over, be grown, and be sexy. Kelly encourages her to find what makes her feel confident. Jessie thinks back to the few months she spent in Las Vegas after college.

Zack and Slater compete over whose life is worse. Among everything, Slater admits he's still pining after Jessie but can't tell her how he feels. Zack admits that he wins and hands over the money. They bet next over eating ten scoops of protein powder. Slater gets started.

Daisy's upset that they're behind schedule. Aisha and Chloe spent a lot of time getting swag. DeVante says he wanted to stop at the video game designer booth, but she wouldn't let him. She says that's a fantasy career, like candy tester. A candy tester from a nearby booth says that is a real job and he hates it. His teeth are all rotting. Daisy says the career fair isn't a joke, especially for the Douglas kids. The Bayside kids will just get jobs at their parents' companies. Jamie calls out to them that he's going to be a doula for expectant fathers. Lexi says that's not fair. The Bayside kids are taking it seriously, too. She has questions about being an influencer if the person running that booth ever shows up. Someone adds a poster to the booth indicating that Lexi's supposed to be that person.

Kelly and Lisa are proud of themselves for dressing Jessie up. They tell her she's sexy and confident and send her to the firefighter. Jessie flirts with him and then spots the pole. She leans on it, but he says it's a safety hazard. Despite this, she starts dancing on the pole and accidentally kicks him in the face. Lisa and Kelly rush Jessie away as the firefighter nurses his broken nose.

DeVante talks to a financial planner. Their conversation is interrupted by Daisy, who asks how many women they have on their board. The financial planner says one. They hope to have two by 2025. Aisha asks if the sweatshirts he has come in women's sizes. Chloe asks if they can get the sweatpants as well. Daisy is angry that they're not taking this seriously and tells Aisha to leave and Aisha does so gladly. Daisy says she's under a lot of pressure and she wanted today to help her figure that out, but they ruined it. DeVante says she ruined it for him. He doesn't get supportive or encouraging remarks like she does. He gets told to stay out of trouble. It was nice for a day to hear he could fly a plane or do whatever else he wanted. He was excited about the fair.

Zack tells Slater he got the nun's phone number, so Slater lost. They see Toddman, who is shaking with paranoia. He asks Zack where Mac is. Zack doesn't know, but says Mac just texted him that everything was going to plan. Slater asks for another bet. Zack says Slater has to tell Jessie he's in love with her. He refuses, so Zack taunts him about it until he agrees to do it.

Jessie is horrified that she kicked the firefighter in the face. That's why she's not ready to date. Slater comes by and pulls Jessie away with him to talk privately.

Once they're alone, Slater asks Jessie what she's wearing and she tells him what happened. He's proud of that she put herself out there, even though it went wrong. It's always scary to try something new, but she already took the first step. Jessie admits that it felt good to have someone be into her. Slater says it wasn't a total loss. She asks him what he needed to tell her, but he says it can wait.

Aisha and Chloe go over their swag. Chloe says she's had a great day. Aisha has, too, except the fight with Daisy. Chloe says Daisy was kind of bossy. Aisha says she was also kind of right. Maybe she should take this more seriously. Chloe doesn't know what she wants to do either, but thinks that's kind of nice.

Toddman is wet and covered with food. He finds Mac working in the library. Toddman explains how he spent the day trying to avoid Mac's pranks and ended up running into problems anyway. Mac says he was working on the spirit competition all day. Toddman's impressed. He realizes that Claire actually liked him and runs off.

Slater tells Zack he couldn't do it because Jessie doesn't need to hear it right now. She needs space because she just got divorced. Zack tries to make another bet, but Slater shuts him down. He doesn't need Zack's approval anymore, just Miriam's. Zack says Slater having a therapist sucks and asks why he didn't mention it earlier. Slater says it doesn't suck. It's making his life better. Zack's proud of Slater. Slater's proud of himself, too.

Toddman tries to convince Claire to give him another chance, but she runs away.

Daisy looks through brochures and collects one from the video game booth. DeVante spots her and she admits that she feels better for spoiling the career fair for him, so she collected pamphlets for him. She apologizes to him and Aisha. Aisha says Daisy was right that she has to focus on her future at some point.

Kelly, Zack, Jessie, Slater, and Lisa excitedly call Toddman over to them. They invite him to go party at Jessie's. He has to go home and change first, but Lisa tells him not to change. He's inspired her. She has her new collection in mind. 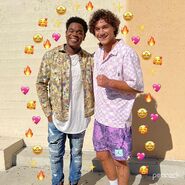 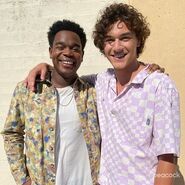 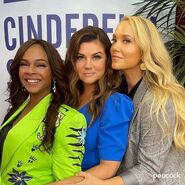