Tiffani Amber Thiessen Ernest was born on January 23, 1974 in Long Beach, California. Her father, Frank, was a park designer and her mother, Robyn, was a homemaker. Tiffani grew up in Long Beach with her parents as the middle sister to her two brothers, Todd and Schuyler. She is of Welsh, German, Greek and Turkish descent, and goes by the nickname Tiff. She attended Cubberley Elementary and Marshall Junior High School in Long Beach. In 1992, Thiessen graduated as valedictorian at Valley Professional High School in Studio City, Los Angeles.

Tiffani first appeared in a TV commercial for the Peaches and Cream Barbie Doll. She got her acting break in 1989 when she landed the role of Kelly Kapowski on Saved by the Bell. This role as the squeaky clean popular cheerleader lasted 5 years.

After Saved by the Bell, Tiffani was looking for a different kind of character. In 1994 a new Tiffani arrived on the scene. She had a whole new look, including shorter hair and breast implants. Tiffani then landed the role as the sexy vixen, Valerie Malone on Beverly Hills, 90210. This time instead of the preppy and cheerful cheerleader, Tiffani played a blackmailing and corrupt vixen that knew what she wanted and would stop at nothing to get it. Tiffani's character ended up sleeping with every male on the show, and becoming rivals with every female.

Currently she is staring in White Collar as Elizabeth Burke, one of the shows main characters. 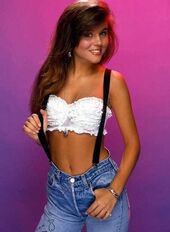 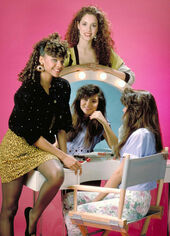 Tiffani with the other girls
Add a photo to this gallery
Retrieved from "https://savedbythebell.fandom.com/wiki/Tiffani_Thiessen?oldid=10128"
Community content is available under CC-BY-SA unless otherwise noted.