Saved By The Bell Wiki
Register
Don't have an account?
Sign In
Advertisement
in: Seasons, Saved by the Bell (2020)

Bayside High gears up to compete in the Southern California School Spirit Competition. Daisy is determined not to get sidetracked by “Bayside nonsense,” but when a cute new student is elected student council VP, she finds herself in way over her head. Mac sees the competition as a way to finally step out from his father’s shadow. Jamie leans on Lexi in the wake of his parents’ divorce while Lexi struggles to be a more understanding girlfriend; Aisha seeks a new outlet after football is canceled; DeVante finds love with a rich Bayside girl, and Slater and a newly single Jessie grow closer despite their tumultuous romantic past.[1] 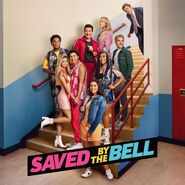 Saved by the Bell - New Season Date Announcement is HERE!

The "Saved By The Bell" Cast Plays Who's Who