Saved By The Bell Wiki
Register
Don't have an account?
Sign In
Advertisement
in: Characters, Saved by the Bell (2020) Characters, Bayside High Students, Female Characters

Nadia Coleman is DeVante Young's girlfriend. Nadia is a student at Bayside High. She is on Student Council as the Class Treasurer.

At the end of the pandemic, Nadia returned to school along with all the other students. Soon afterward, Aisha started to treat Nadia poorly. She said it was because Nadia ghosted DeVante, her friend. Nadia said that she didn't ghost him. They broke up because he cheated on her. Aisha didn't believe that, but Nadia said he kept getting messages from a girl whose number wasn't saved in his phone, sending him emojis. Then she never heard from DeVante again. Aisha later found out DeVante had been texting Toddman and ended up staying with him during the pandemic because he was worried about getting his grandmother sick.[1]

After the election, Toddman announced that Nadia was the class treasurer. At the first student council meeting for the year, Daisy announced the School Spirit Competition. They needed to complete 15,000 volunteer hours in order to qualify for it. Nadia suggested she and DeVante could pick up litter somewhere with a waterfall. Daisy wanted to focus on serious suggestions.[2]

Nadia invited DeVante to her house to meet her parents. On the day of the dinner, Nadia asked if he needed a ride, but he said he didn't and asked if he could bring anything. She gave a few suggestions for gifts for her stepmother. DeVante arrived at the dinner an hour and a half late. Things were tense at first until DeVante met their Black British butler and joked about them having a "Geoffrey." Once the ice was broken, things were much more congenial between them. When DeVante started to talk about the difficulties of traveling by bus, Nadia suggested they give him a Volvo they had that no one was driving. Their butler brought him the key and they said he could drive it home that night.

DeVante drove Nadia home in the Volvo after the school's talent show, but he made her ride in the back, which made her suspicious. When she confronted him about it, he showed her that the car door had been dented, but told her he'd already gotten a job to pay for the repair. She laughed it off and said it was nothing and she could just put it on her card. Her dismissal led to him giving her back the car and leaving by bus.

Nadia went to The Mac, where DeVante was working, and apologized for ignoring her own privilege when speaking to him. After their conversation, he decided to keep borrowing the car while he worked to save up money to buy his own.[3]

Nadia and Jamie watched DeVante and Lexi perform in the school musical. When they finished, Nadia said they were dating the most talented kids in school.[4]

When Gil sabotaged Bayside by erasing all their earned volunteer hours, Toddman suggested a dance contest with mandatory participation by all students in order to get all the hours they needed in one night. Nadia spent her time dancing with DeVante. When she started to get tired with seven hours remaining, Jamie offered her his water, which he didn't know was actually an energy drink.[5]

AS the students at Bayside started to prepare for the Spirit Competition, DeVante practiced his singing but found he couldn't sing. Nadia believed Valley must have sabotaged him, but DeVante didn't think so. Later, Valley sabotaged Nadia by spooking her horse. DeVante later told Nadia he couldn't sing because he cared about it. He loved Bayside and wanted them to win. This fixed his problem and he was able to sing beautifully while Nadia watched from the audience. Bayside went on to win the whole competition.[6] 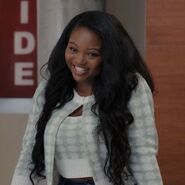 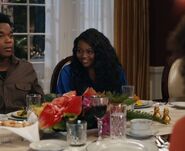 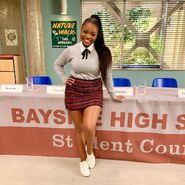 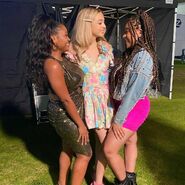 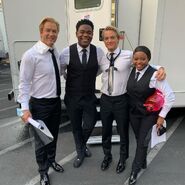 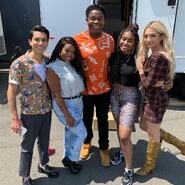