- Chula Vista High School
Mario Lopez, Jr is an American actor known for portraying the role of A.C. Slater on Saved by the Bell.

Mario was born in San Diego to Elvia (who worked as a telephone clerk) and Mario Michael Lopez, Sr. (who worked for the municipality of National City). He was raised in a large Catholic family with a young sister named Marissa.

Mario attended Chula Vista High School where he was a wrestler and in 1987, during his freshman year, he took 7th place in the state tournament. Mario graduated from high school in 1991.

Mario's professional career began in 1984 when he appeared as younger brother Tomás on the short-lived ABC comedy series, "a.k.a. Pablo." That same year, he was cast as a drummer and dancer on "Kids Incorporated".

In March of 1987, he was cast as a guest star on the popular NBC sitcom, "The Golden Girls" as a Cuban boy named Mario who faces deportation. In 1997, Lopez starred as Olympic diver Greg Louganis in the television movie, "Breaking the Surface: The Greg Louganis Story."

The following year, Mario was cast as Bobby Cruz in the USA Network series, "Pacific Blue." He left the series after two seasons and went on to guest star on television shows such as "Resurrection Blvd.", "Eve," and "The Bad Girl's Guide."

From March to July 2006, Mario portrayed the role of Dr. Christian Ramirez on the daytime soap, "The Bold and the Beautiful." He also appeared on "George Lopez" and "Nip\Tuck."

In the fall of 2006, Mario appeared as a contestant on the 3rd season of ABC's "Dancing with the Stars" with his partner and then-girlfriend, Karina Smirnoff. They finished in second place.

Zack and Slater (Zack left side & Slater right side) 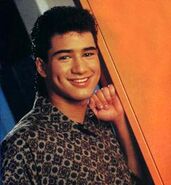 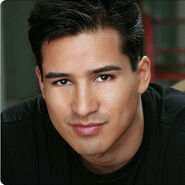 Add a photo to this gallery
Retrieved from "https://savedbythebell.fandom.com/wiki/Mario_López?oldid=10580"
Community content is available under CC-BY-SA unless otherwise noted.