Saved By The Bell Wiki
Register
Don't have an account?
Sign In
Advertisement
in: Characters, Saved by the Bell (2020) Characters, Bayside High Students, Male Characters

Jake Takamura, alias Gil Vatooley, is Daisy's crush. He is originally a student from Valley High.

A year before the School Spirit Competition, Jake was hanging out with his friends at The Min, Valley's version of The Max, when he decided to infiltrate Bayside.[1]

Jake, as Gil Vatooley, was elected class vice president. He came to the first student council meeting, where he met Daisy, who was looking for ideas to get the 15,000 volunteer hours they needed to qualify for the School Spirit Competition. Gil gave a proposition, including a plan to pull it all off, drawing Daisy's attention.[2]

After Daisy talked to Gil, Gil asked her to hang out on Friday night. She countered with hanging out during school hours so her mother wouldn't find out she was dating someone. In order to facilitate this, Daisy had the idea to start a student hotline to get the needed volunteer hours for the Spirit Competition.

Prior to starting the hotline, they had to undergo training, which Toddman ran. After being trained, they started taking calls. When Aisha and Lexi got into a fight, Daisy landed herself in detention trying to break it up. She was surprised when Gil joined her in detention. He said he was there for setting Lexi's hair on fire, but she set her own hair on fire.[3]

When Daisy learned that no one else would participate in the Talent Show if Mac was in it, she persuaded Mac to step back so others would have a chance. When Gil found out about this, he went to Mac and thanked him. This reminded Mac of something he did better than his father and Mac decided to enter the show after all, which led to everyone else dropping out. Daisy started to panic that they wouldn't get enough hours for the Spirit Competition. When no one else would step up, Gil said he'd perform if no one else would in order to save the show, even though he had crippling stage fright. Daisy was grateful for his offer, even though they didn't end up needing him, and kissed him.[4]

Gil asked Daisy to go on a real date with him, but she told him she hadn't told her mother about them yet. He said he'd told his mother because he thought she was his girlfriend. Daisy promised to tell her mother about them. However, after she told her mother, her grandmother told her that Gil was cursed. When Daisy told Gil about this, Gil said he understood Daisy's hesitance. When Daisy's grades dropped, she went to Gil, who said he was okay with her spending less time with him in order to focus more on her school work. Daisy decided to give up something else instead and handed over Spirit Czar duties to Mac.[5]

Daisy Standing Him Up

One day, when Daisy missed their planned lunch, Gil came to find her and learned she'd missed their lunch because she was doing a limbo contest at Mac's request. He suggested she start saying no to Mac when she said she'd done it because it was easier just to go along with what he wanted.[6]

When they'd been dating for one month, Gil wished Daisy a happy one-month anniversary and gave her a laminator. She told him she'd gotten him a gift as well, but didn't have it with her. Gil then went to help Mac upload all their volunteer hours to prepare for the spirit competition. Gil did so, but then Mac pranked him. Gil apologized for whatever he did to upset Mac so much that he made the prank video.

Daisy gave Gil his gift, a happy anniversary video recorded by L.M. Millencratz, their favorite author. He didn't recognize her in the video because she said seeing pictures of the author ruined the illusion for him. Daisy quickly said she had a better gift coming.

Meanwhile, Mac's pranking continued. After a particularly harsh prank, Gil apologized again and the crowd that gathered around them was horrified at Mac's actions. Then Daisy came up to them with Trevor's decapitated head, which she'd found in Gil's locker, and asked him if he'd murdered Trevor. She then realized that Gil Vatlooley anagrams to I Go to Valley.[7]

Gil explained how he'd had everyone from Valley covering his tracks so no one at Bayside figured out who he really was. He had tried to sabotage several things, but it all went unnoticed, so he switched to Plan B: destroying all evidence of their volunteer hours. Still, Gil said, he'd fallen for Daisy and begged her to talk to him. She refused, but during the dance contest, which they planned to replace the hours he'd deleted, she called him and said she wanted to talk. They met up outside the school and she told him how upset she was because he lied to her from the moment they met. He asked her to have their first real dance together and they did. As they dance, he told her he still wanted them to be together, that his feelings for her were real. He also said she wasn't like those other Bayside kids. She told him she was as Bayside as they come and revealed that she'd been holding a dance number to his back so the time they spent dancing counted as volunteer hours for Bayside. He turned cold immediately and told her they wouldn't win anyway.[8]

On the day of the Spirit Competition, Jake taunted Daisy, saying he'd been studying all year to beat her in the knowledge bowl. As the knowledge bowl started, Jake and Daisy kept their scores close. Finally, on the last question, Daisy edged him out and won. After all the events were completed, Bayside and Valley were in the top two slots and got ready for the final race, with Jake running against Mac. Mac then surprised Jake by saying Jamie was going to run against Jake instead of Mac. The race started and was full of sabotages designed to distract Mac, but which didn't work on Jamie. When Jamie won the race, Bayside celebrated and Daisy whispered in Jake's ear that she only dates guys who win the Spirit Competition.[9] 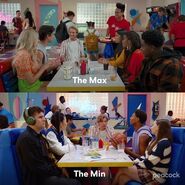 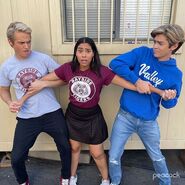