Saved By The Bell Wiki
Register
Don't have an account?
Sign In
Advertisement
in: Episodes, Saved by the Bell (2020) episodes

1-900-Crushed is the third episode of Season 2 of Saved by the Bell (2020) and the thirteenth episode of the series overall. It will be released on November 24, 2021 on Peacock TV. This episode shares the same title as 1-900-CRUSHED from the original series Saved by the Bell.

Slater dances as he directs traffic. Nearby students dance as they pass. He stops dancing suddenly when he sees Jessie sitting in her car. A parent yells from his car for Slater to stop dancing and let him drop his daughter off. Slater goes to talk to Jessie instead. She doesn't want to go inside because everyone knows she's getting divorced. Slater say it sounds like she could use a break, which she agrees is true. Slater says it's too bad adults don't get cut days. Jessie never took one in high school either. While they were all at the beach, she stayed at school fighting to get styrofoam cups banned. Slater says the universe owes her one. She says they can't just blow off work. He tells her she needs to refill her tank or she won't get where she needs to go. He insists they won't notice they're gone. Someone nearby crashed their car and Slater tells Jessie they need to get out of there.

On the bus, Daisy tells Aisha she spoke to Gil yesterday. Aisha is upset Daisy didn't tell her sooner. Gil wanted to hang out Friday night, but Daisy countered with hanging out during school hours so her mom wouldn't know she's on a date. Aisha asks to copy Daisy's chemistry homework. Daisy says fine, but like she told Aisha yesterday, it's the last time. Daisy then remembers she had plans to have lunch with Lexi and Lexi and Aisha don't really hang out. Aisha says they're fine. They just don't talk about the thing they don't talk about. Daisy understands.

The bell rings and Jamie walks into class sadly. Mac tells him it'll be okay. DeVante says he's sorry about Jamie's parents. Jamie says it's been tough, but he's started journaling and he thinks it's helping. He shows them a drawn picture of a monster. Principal Davis walks in. Toddman offered him a job at Bayside teaching Modern Southern California History. Their first assignment will be a group presentation. Mac says he has to do well on this because his dad is actually looking at his grades now that he's home. If Mac doesn't get a perfect 2.0, he'll be grounded from international travel for a whole week. Davis assigns groups and topics. DeVante, Mac, and Jamie get assigned earthquakes as their topic. DeVante immediately makes a plan. Mac's in, but Jamie's distracted by watching his father move out on the Ring cam.

Jessie and Slater talk at the beach. She feels like a fraud because she wrote books about marriage. She wonders where she goes next. She feels bad for bringing the mood down with her complaints, but Slater says she has a lot to complain about. A waiter brings their drinks. Jessie asks if those are styrofoam cups. She starts ranting about how long it takes to biodegrade. The waiter says he's doing to tell the owner if he doesn't switch to a sustainable alternative, he'll quit. He yells out to his dad. After he's done, Slater starts smiling. Jessie figures out it's because he knew they had styrofoam cups there. That's why he chose that place. She knows he's not into therapy, but what he just did made her feel so much better. Slater is excited to hear her saying he's right.

Lexi checks on Jamie, who is still pretty sad. She says she's been through tons of divorces. The entire cast of The Real Housewives of Beverly Hills this season is her stepmoms. The first is always the hardest, but by the fifth, he won't have any feelings at all. Or maybe his parents won't remarry. Jamie's not sure Lexi is helping. She says it doesn't have to be all bad. All divorces end in presents. Jamie leaves sadly.

Daisy had an idea to get volunteer hours: a student hotline. This will also provide time to spend with Gil during school hours. Lexi comes sit with them and complains about her day. She stops herself when she accidentally mentions Jamie. She pretends she was talking about Jamie Foxx. Aisha says she can talk about Jamie. Lexi tells them Jamie doesn't want her help dealing with the divorce even though she's in the Guinness Book of World Records for most divorces caused by a single child. Daisy says sometimes people aren't looking for advice. Aisha suggests that she could try listening. The suggestion upsets Lexi. Aisha reminds Lexi that her podcast is called "Shut Up While I Talk." They start bickering until Daisy intervenes and gets them to talk about the teenline. Lexi says the teenline will be the perfect place to prove what a good listener she is. Daisy says they don't need any more volunteers, but Lexi doesn't hear her. Aisha also volunteers, to compete with Lexi.

Mac says he found someone to do the report for them, but one of them will have to marry a woman to get her US citizenship. DeVante says they could just write the report. He already started it and shows them what he has. They start practicing their presentation. Jamie becomes tearful when it mentions the Pacific plate and the North American plate separating. DeVante apologizes and tells him he can try reading another section. Jamie does that, but starts crying again. He's tired of crying all the time. Mac tells him to let his mind wander to something else when he starts to feel like crying. DeVante says instead of that, he should toughen up a little. DeVante doesn't know how to do that. Jamie starts crying again.

Toddman welcomes all the student volunteers. He welcomes their help to crush Valley, but tells them if a Valley student calls in, treat it like a human being. While he continues talking, Gil compliments Daisy's outfit. Toddman has the training manual from the first teenline and he starts reading it. While he reads, Aisha and Lexi bicker in the audience. Toddman asks for volunteers to do some training. Aisha and Lexi race against each other to do it.

Mac and DeVante give Jamie a lecture about masculinity and burying his feelings. They're going to show him sad things and bully him when he cries over them. After that, he has to watch the first ten minutes of up and the last ten minutes of Coco at the same time. Mac then goes to hit Jamie with a laptop, but Slater interrupts. Mac asks why he's there because they had a sub in gym. Slater lies that he's been there all day. DeVante realizes he's skipped school and is just sneaking back in to get food.

Lexi and Aisha role play. Aisha plays the teen caller while Lexi is the advisor. Toddman says Lexi could tone down the hostility and says they'll take a break and try again. Gil asks Daisy if her friends are okay and she says they're being very unprofessional and goes to talk to them. She interrupts their bickering and yells at them. Toddman hears this and calls Daisy out for her behavior.

Jamie, Mac, and DeVante are in Slater's office. He asks what the trouble is and Jamie explains. Slater says he can't go through life burying his feelings. Slater talks about a difficult time in his own life, a girl he liked marrying someone else. It hurt him a lot. He tried to ignore his feelings, but running from your problems never works. Sometimes the hardest thing you can do is to admit you're having the feelings for a reason and it's okay. DeVante is impressed. Jamie realizes it's okay for him to be sad. He just has to accept that his parents are splitting up. Slater then starts talking about his own situation again, confusing Jamie.

Daisy and Gil take calls on the teenline. They give their callers the exact same response. Lexi advises her caller to watch her show for advice. Aisha encourages physical violence as a solution, but her caller hangs up on her. Her next call is a teen in Aisha's situation. Aisha thinks it's Lexi and tells her to stop, but then sees Lexi by the water cooler and starts to give genuine advice on her situation. Suddenly, Lexi pops up behind her, upset because Aisha admitted that she was upset with Lexi because of it. Aisha is confused until she sees that the Lexi by the water cooler was just a cardboard cutout.

Gil and Daisy are impressed with each other. They hear Aisha and Lexi fighting. Daisy stops them and tells them how selfish they're being. Lexi says Daisy's only there to get into Gil's corduroys. Daisy says today was important to her, but they've ruined it by turning it into a competition. Aisha and Lexi start fighting again and Lexi answers a call to prove she's the best helper. She offers to let the caller hang out on her boat. Aisha takes the phone and tells the caller not to listen to Lexi. Daisy tells them to stop and ends up breaking the phone, upsetting Toddman. He gives Daisy detention.

Lexi answers another call. It's Aisha. She's still mad at Lexi, but feels bad for getting Daisy in trouble. They want to make it right. They agree to consult the manual. They go through the steps and talk about the problems they have with each other. Aisha says she's over Jamie, but it hurt that Lexi started dating him right after he and Aisha broke up and never checked on her. Lexi's still insecure about their relationship. Jamie won't talk to her about his parents' divorce because she's bad at listening. Aisha says she did a good job listening just now and can do the same with Jamie. Aisha has an idea for step four.

Davis calls Mac, DeVante, and Jamie up for their presentation. Jamie starts his portion and ends up not crying when he says separated. As the presentation continues, Mac zones out and thinks about a beach with a mermaid. As they finish their presentation, they get a standing ovation, which confuses Davis. He's also confused by Slater watching from the doorway saying he's proud of Jamie.

Jessie tells Slater yesterday was fun. It awakened something in her. He says him too. Jessie has a list of restaurants that still use styrofoam and she's going to drive to all of them and curse them out. She asks what it awakened in Slater. He lies and says being near the beach reminded him how much he hates seagulls, so he's going to try to lower their numbers. He leaves abruptly.

Lexi asks Jamie how he's feeling. He says he's feeling better and asks about her day. She thinks she might have learned something, which is weird. He asks if that's all she has to say, because she usually does. She tells him to talk because she just wants to listen. He starts talking to her as they walk down the hall together.

Slater tells a therapist he's still in love with Jessie. The therapist asks who Jessie is and who he is, because he just came in and started talking. He needs to make an appointment. 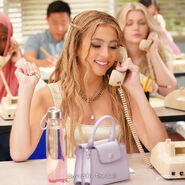 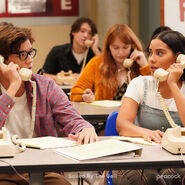